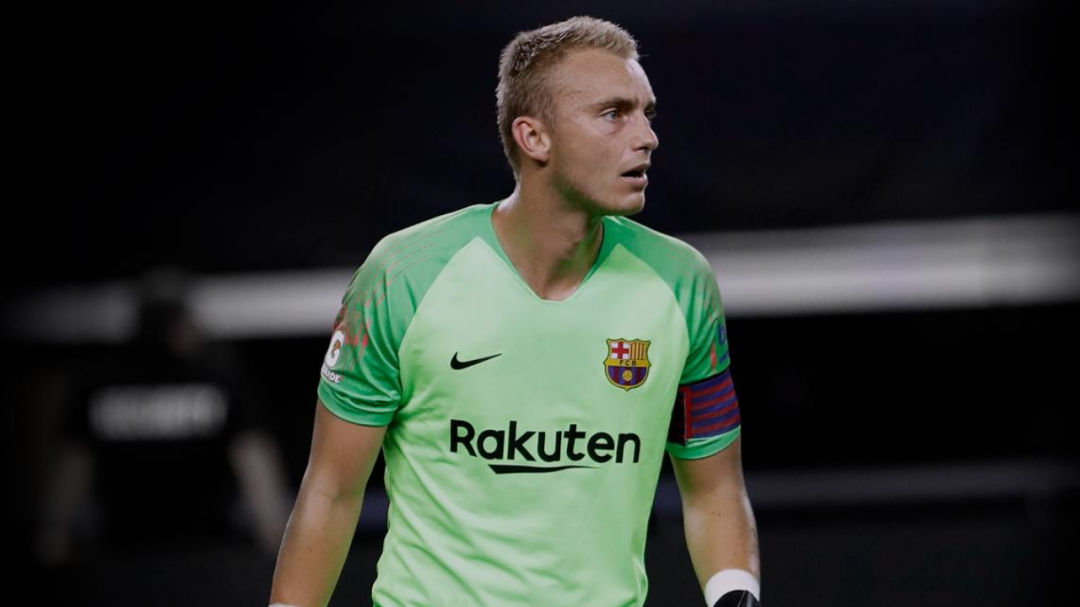 Where should he go? Three potential destinations for Jasper Cillessen.

After three seasons with Barcelona, Jasper Cillessen is finally ready for a challenge elsewhere.

In an interview with Ziggo Sport, Cillessen announced that he will be looking for a new club in the summer as he ‘wants to play’.

Nobody is able to argue with that.

The Dutch international joined the club from Ajax in 2016 following the departure of Claudio Bravo, but he’s only ever seen limited playing time. In three years with the Catalans, Cillessen has made just 29 appearances, mainly in the Copa Del Rey.

He’s blossomed into one of the world’s top back-up goalkeepers with Barcelona, but he’s now looking to take his career to the next level. The 30-year-old has decided that now is the time for him to return to playing regular starting minutes, and he’s confirmed that he’d like to move to a top club that can offer him consistent playing time.

But who should Cillessen join? There are a lot of potential suitors who could really use a goalkeeper of Cillessen’s status, some of which are better options than others. Here’s a shortlist of clubs that I think should go all-out for the Dutch goalkeeper this off-season.

Who doesn’t love a reunion?

There’s likely no club closer to Jasper Cillessen’s heart than Ajax. The 30-year-old experienced some of the best years of his career with the Amsterdam-based team, whose stadium is located roughly 80 km away from Cillessen’s hometown of Nijmegen. Across six years with the club, Cillessen made 143 appearances. These include 101 appearances in the Eredivisie and 32 appearances in the UEFA Champions League and Europa League. Cillessen also won three Eredivisie titles (including the 2013-2014 championship, when he played his first full season with Ajax) and the AFC Ajax Player of the Year award in 2015 and 2016.

Cillessen’s main selling point (at least, in relation to Ajax) is his playing style. Because of their shared connection to Johan Cruyff’s football philosophy, both Barcelona and Ajax rely heavily on goalkeepers who are comfortable on the ball. For these clubs, it’s not enough to have a goalkeeper who can just save shots; he must also be comfortable handling the ball while under pressure, engaging in build-up play through quick but accurate passing, and challenging opponents over loose balls in their box. Cillessen, having spent six years with Ajax, adopted these skills needed to catch Barcelona’s eyes, and now that he’s perfected them with the Catalan giants, he’s ready to return to Ajax and use them on a full-time basis.

Cillessen: "Return to Ajax? I do not rule it out, we will have to wait until the summer to see what happens."

A potential return to Ajax has one deciding factor: André Onana. Ajax’s Cameroonian number one has been the subject of multiple transfer rumours as of late, some of which link him to Barcelona. Although he signed a contract extension not that long ago, it’s unlikely Onana will actually see out his new deal until 2022. Therefore, the route the 23-year-old takes in the summer will likely influence Cillessen’s destination choice. If Onana wants to stay for another season, Ajax might hold out on Cillessen, given that the Dutchman wants more playing time and they can’t provide him with it. If Onana leaves though, I expect Ajax to express interest in Cillessen, given his connection to the club and the club’s need for a goalkeeper who fits their style of play.

It’s still possible Cillessen joins Ajax if Onana doesn’t leave. As I mentioned earlier, I don’t think Onana will still be with Ajax come 2022. In this case, Ajax would need to bring in a new goalkeeper as preparation for Onana’s departure, and Cillessen is an excellent option due to previously stated reasons.

If there’s one club in desperate need of a new goalkeeper, it’s Olympique de Marseille. The French club are currently experiencing a goalkeeper dilemma, with neither option really fit to start in the upcoming seasons.

Steve Mandanda—a club icon—has looked on-and-off this season. Despite his nine clean sheets, the French international has recorded a save percentage of 63.3 percent; one of the lowest totals among Ligue 1 starters this season. He’s also 34-years-old, and with a contract that expires next year, it’s unlikely he’ll continue as the club’s number one. Mandanda’s back-up, Yohann Pelé, is also unfit for a long-term position. He’s 36-years-old at the moment—about two years older than Mandanda—and he’ll be 37 by the time 2020 rolls around. Like Mandanda, Pelé’s contract also expires next year. Pelé has never showed signs of being a reliable starting goalkeeper for a club of Marseille’s status, and his time as a number one has likely passed.

It’s a bit like Valdes up against San Iker for Spain. As good as Cillessen is, he’s not MaTS. They should let him go in the summer. He’d be super at Dortmund or some other high achieving, high tempo outfit. Marseille might take a run at him.

In fairness to Mandanda and Pelé, Marseille have not had a great season in general. They’ve lost a total of 12 league games, which is the most among Ligue 1’s top 7 clubs. They’ve also conceded 47 goals, which is the second-highest tally among the league’s top 12 clubs; only Nîmes Olympique (53) have conceded more.

Could this all just be down to an unfortunately bad season? I think so. A fair amount of people tipped Marseille to finish as high as second in the table at the start of the season, given their strong 2017-2018 season and the fact that they didn’t lose any of their key players. In my opinion, Marseille are only a piece or two away from Champions League spot contention.

Considering the circumstances surrounding Mandanda and Pelé, it’s clear that one of those pieces is a new goalkeeper. In this case, Jasper Cillessen is more than capable of plugging that hole. He’s certainly a better goalkeeper than Mandanda and Pelé in their current states, and he brings experience from regular training with Barcelona and Holland’s national team. His ball-playing qualities are also beneficial to Marseille, and he’s undoubtedly a reliable shot-stopper.

The only question mark surrounding Cillessen is his lack of playing time. Is he ready to step out of the shadows of back-up goalkeeping and become a full-time starter for a storied club with demanding fans? It’s a serious question that could prove risky. But if it pays off, the advantages would massively benefit Marseille. Olympique de Marseille isn’t the only club who could be on the market for a new ‘keeper; AS Roma are in a somewhat similar boat. Despite bringing in a new goalkeeper during the summer of 2018, the recent season seems to have convinced them that their hunt for a reliable number one isn’t over yet.

Robin Olsen was supposed to be the heir to Wojciech Szczęsny and Alisson Becker. Following the former’s departure to Juventus in 2017 and the latter’s move to Liverpool in 2018, Olsen was expected to take over their throne and continue what had been a short but respectable lineage of good goalkeeping. But despite a decent spell with Copenhagen and a commendable 2018 World Cup, the Swedish goalkeeper has failed to live up to initial expectations. His inconsistency has taken Roma a step back compared to last season; they haven’t broken the Serie A’s 60-point barrier yet, despite finishing last season with 77 points. Statistically, Olsen is among the league’s worst starting goalkeepers in terms of clean sheets (4), save percentage (61.5 percent), and goals against average (1.56).

Olsen’s form has been so unpredictable that Roma have opted to give him the rest of the season off. The Swede’s last performance was a 4-1 loss to Napoli on March 31. Since then, he’s watched Antonio Mirante fill in for him. And Roma have improved. The Romans have not lost in the six games Mirante has started since, even though they faced the likes of Fiorentina, Sampdoria, and Inter Milan.

Mirante isn’t a long-term option, though. He may be good enough to help Roma close out the current season, but considering that he’ll be 36-years-old by the time the 2019-2020 season rolls around, he can’t be relied upon in the future. It’s either Olsen or bust for Roma, and considering Cillessen’s availability, Roma could be more inclined to busting out a move for the Dutchman rather than giving Olsen a second chance at the starting position.

If Roma intend to look outside Italy again for a new starting GK and knowing Cillessen is open to leaving Barca, I would replace Olsen for him in a heartbeat.

If you ask me, if Roma do express interest in signing Jasper Cillessen, they’ll be the favourites to land him. This is because it wouldn’t be the first time they’ve attempted to capture his signature. When Roma were shopping for an Alisson Becker replacement last summer, they showed legitimate interest in Cillessen. Ultimately, they went with Robin Olsen, likely due to his slightly younger age (nearly a year younger than Cillessen) and the fact that he played as a starting goalkeeper in the seasons leading up to the current one. But now, following Olsen’s underwhelming performances and Cillessen’s availability, the Romans won’t want to make the same mistake twice.

One thought on “Where should he go? Three potential destinations for Jasper Cillessen.”